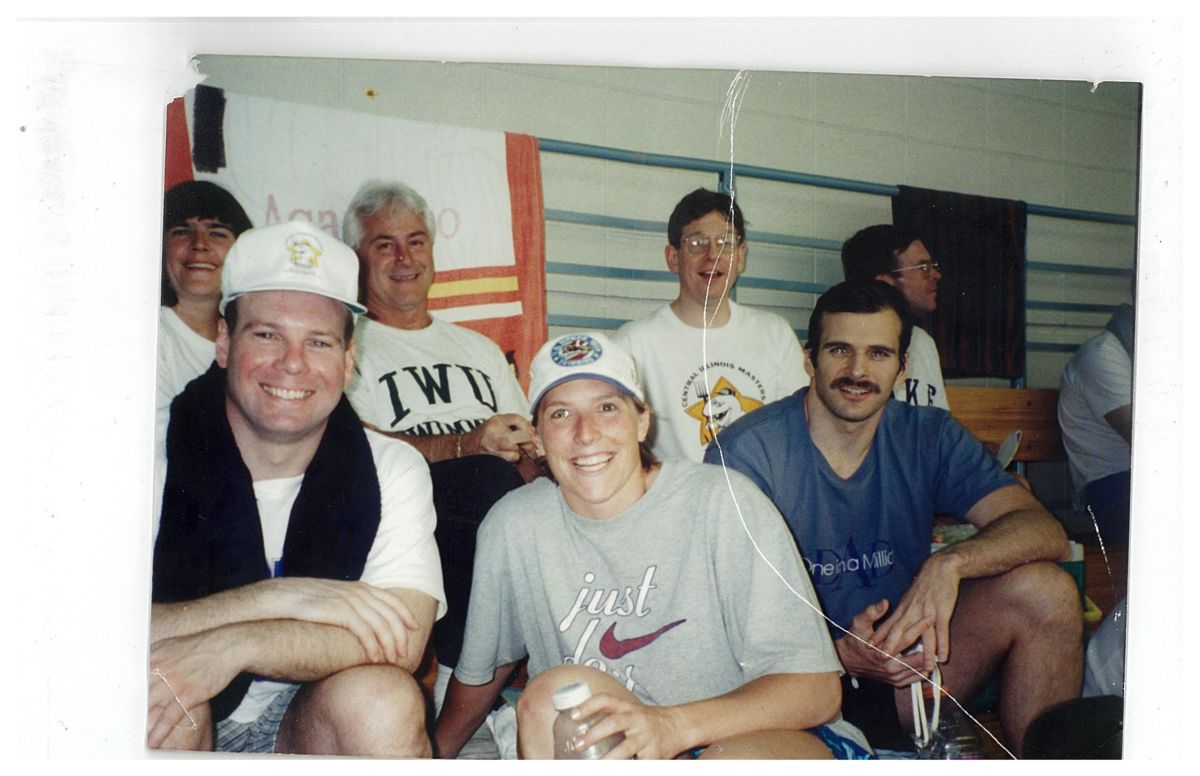 Shortly after the new Fort’s Natatorium swimming pool was opened on the Illinois Wesleyan University campus in 1989, a small group of former collegiate swimmers began swimming together during open hours at the pool.  About a half dozen formed that first group of “master” swimmers and they got together a couple of times per week.  Practices were determined by whomever was there and was the first to propose a set.

In 1992, the group, which had grown to about 12, decided to obtain an official US Masters Swimming sanction so they could compete as a team at USMS swimming meets.  In order to not be confused with the newly formed “Illinois Masters,” they were called the “Lincoln Masters.”  That name stuck until 1995.  If you look up results from swimmers at that time, you’ll see the original team name in the records.

Dues were assessed irregularly, if at all, and no official accounting existed.  Dues covered some basic expenses and the balance was donated to the IWU Swim Team.  Also, team members regularly volunteered to help run IWU swim meets.

Coaching for the newly named “Central Illinois Masters Swim team” started in 1995 when Teresa (Zurick) Fish became the Aquatics Director and Swim Coach at IWU.  Teresa wrote practices on a white board (purchased for her by team members and still in use today!) and also swam with the team.  Practices were held on Monday & Wednesday evenings immediately following the IWU swim team practice.  Informal Saturday morning practices started around this time as well.

From 1995 through the early 2000’s the team grew to about 35 swimmers.  Dues were $35 every six months and members were required to work at least one home IWU swim meet per season. Practices were held on Monday & Wednesday evenings, and Tuesday & Thursday mornings, with an informal practice on Saturday morning. A new coach was hired to handle morning practices from the deck.  Evenings continued to be informal, but with a practice left on the board.  In order to cover increasing costs of the program, dues were raised to $70 every 6 months. Membership on the team continued to grow until it reached around 70.

We currently have 4 coaches who regularly handle practices, and one part-time coach who fills in.  Current membership runs between 85 and 90 swimmers.

The team hosts an annual master’s swim meet called the Spring Classic on the first Sunday of March in the Fort Natatorium.  We also host the Central Illinois Open Water Swim (CIOWS) at Evergreen Lake every June.  Hundreds of swimmers from all over the country have participated in the Spring Classic and CIOWS.  Regular donations from the proceeds of these events and our dues are made to IWU for the purchase of swimming equipment and pool maintenance.

The future of Central Illinois Master Swim Team, Inc. is bright and we hope you become a part of our story as a member of the team.